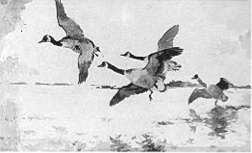 The month of March is a time of migration. The skies are full of geese heading north making a graceful “V” against the pale spring sky. The patterns these migrating wildfowl make as they wing their way to their summer homes remind those who admire Frank Benson’s art of the beautiful wash drawings that he created.

The chapter titled “Across the Marsh” in the book The Sporting Art of Frank W. Benson begins with a description of what a March morning at Benson’s Cape Cod retreat might have been like for the artist, “The sky is thick with clouds, their heavy darkness pulling them down close to the water. The thin sliver of early morning light is weak and carries little promise of warmth. Frank Benson, dressed in heavy woolen trousers and an old sweater worn thin at the elbows, stands on the porch of the weathered farmhouse looking out across the marsh to the Inlet where the ocean rolls beneath a sullen, gray sky. He sips hot coffee from an enameled cup and watches as the wind-whipped waves toss geysers of spray. His companions have not yet risen, having arrived late on the evening train. It does not look like a promising day for shooting. He will let them sleep. Suddenly, three black ducks fly across the water, just skimming the tops of the marsh. Then five more. Their soot-dark forms make a pleasing design against the gray sky and Benson begins to mentally plan out a painting as well as a morning on the marsh. Looks like there will be shooting after all. He pulls his watch from his pocket. There is plenty of time to sketch before breakfast.”

The Farmhouse, which overlooked the Nauset Marsh on Cape Cod, was exceedingly rustic: two fair-sized rooms and one small bedchamber on the first floor and three small bedrooms tucked under the eaves on the second. The front room, probably the original parlor, served as a double bedroom and was heated by a woodstove; it shared a chimney with the back room that was used by Benson, his brothers-in-law and his friends as combination living and dining room. At the far back of the house was a kitchen shed with a wood cookstove

It was a small and tidy house, build around 1840. A broad, wooden platform that served as a porch was added to the side overlooking the tapestry of marshes and inlets, sand dunes, and sea. The colors changed with the seasons and the men never tired of the view. The Farmhouse had no electricity and a hand pump delivered water to the stone sink in the kitchen. The furniture was rudimentary but comfortable. The outbuildings consisted of a barn, an outhouse, and further down the hill, by the water’s edge, a boathouse that stood at the mouth of Salt Pond Creek. All this is now contained within the boundaries of the Cape Cod National Seashore and is not far from the Salt Pond Visitors Center.

It was here that Benson began to paint his stunning ink wash drawings in the late 1890s. Working in the subtleties of blank and white, he created such works as this wash of three geese taking off from their night’s rest on the waters below the farmhouse.